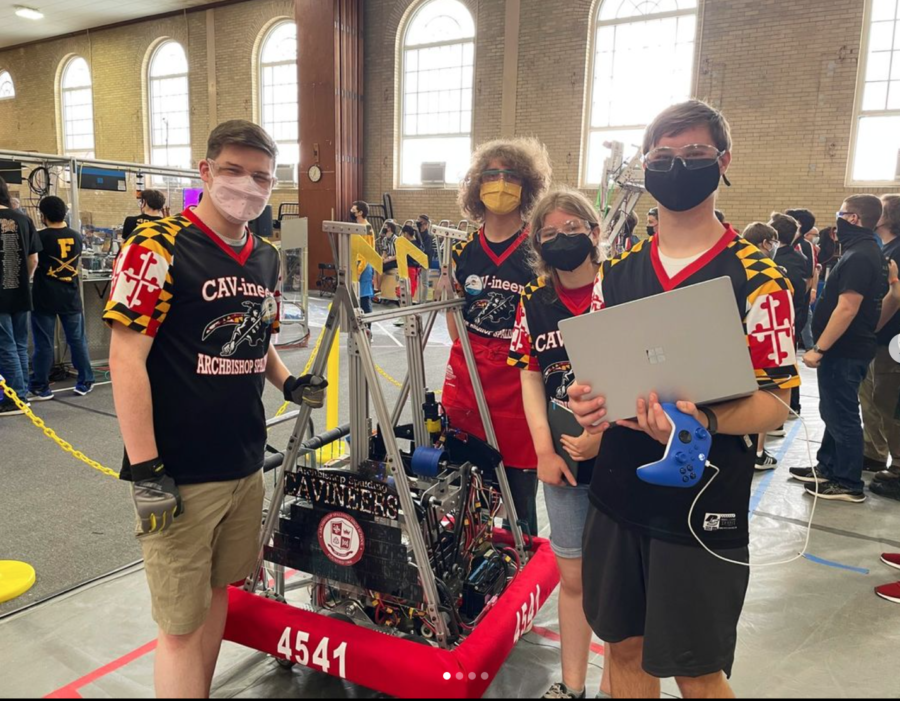 While Spalding may be known as a sports school, the 4541 First Robotics team disagrees. Two years ago, the Cavineers (cavalier + engineer) were headed toward worlds. Even when the season got cut short due to Covid, the students did not give up. The following year, Spalding participated in FIRST Robotics virtually, and now they have come back stronger than ever. Recently, the 4541 Cavineers competed at a local competition and got second place.

But how do the competitions work? On the gamefield are six robots- three from each alliance, which consists of three different schools. On the side of the arena is the drivers station, where team members can control their robots. For the first 15 seconds of the match, the robots must work autonomously, meaning it has to act solely off of its programming and no human help is allowed. The bots must intake inflatable soccer-sized balls and shoot them into baskets called hubs. The remaining time is then driver controlled. As time begins to run out, the robots must attempt to climb monkey bars at an increasing angle. The higher the bot gets, the more points the team earns. After the match, the points are totaled and the alliance with the most points wins. Then the points are sectioned off individually and each team is ranked accordingly.

Spalding’s robot, Jankins, specializes in climbing. Michael Hinrichs, class of ‘22, explained the climbing process as having two parts: “First, the robot’s arms reach up and attach to the lowest bar. The bot then proceeds to pull itself up and latch onto the same bar with its stationary hooks,” Hinrichs continues, “After that, the robot mimics its previous movement and uses its momentum to swing to the next bar.” The process repeats until it reaches the top.

When asked about the programming behind the robot, Ryan Bode ‘22 said that “the biggest challenge was programming the shooting targeting system. We had to calculate the angle and speed for multiple situations.” Coding during matches is prohibited, although allowed between matches. That means that if the programming is wrong, the team is forced to take a defensive stance- a strategy that makes little to no points.

While the programming and building teams tend to get all the credit for robotics, there are so many other crews that make up the 4541 Cavaliers. All the subsections combine together like gears in a well-oiled machine. Make sure to follow the team’s instagram (@4541cavineers) and tiktok (@Cavineers4541), and support them as they continue their season into districts!