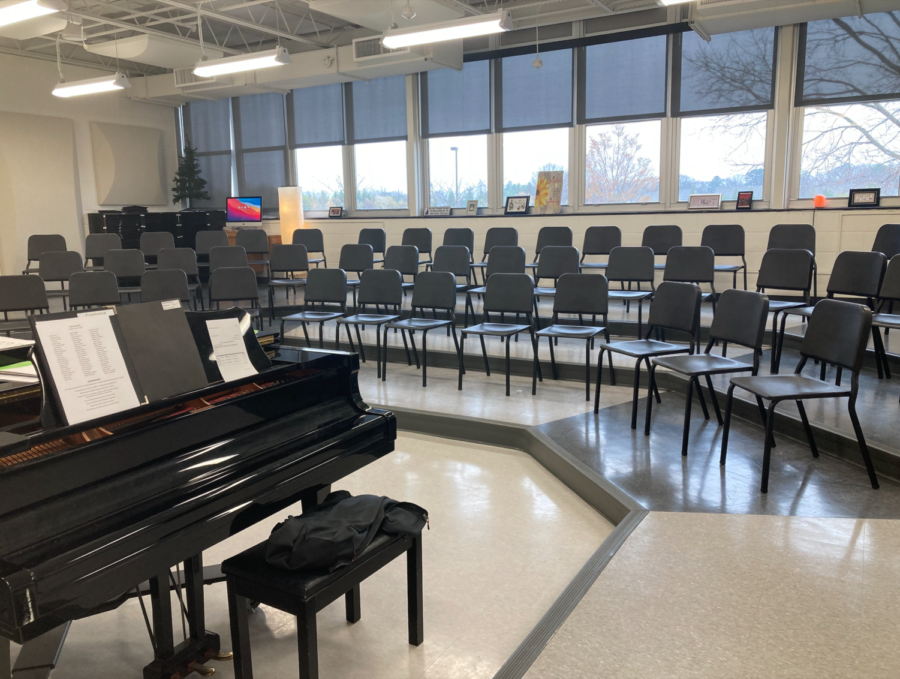 There are many new and exciting changes to the new music wing. For starters, there’s more space for materials and classes. This is a big deal since the choral and guitar ensembles used to share a room. Also, the materials from the theater productions were not able to be reused because there was no place to store them.

A big difference between the new and old music wings is that there’s more space for classes. Previously, the guitar ensembles would have to share a room with the choir ensembles. It would be really hard for both groups to practice and to hear instructions. Now the ensembles have more space to spread out their equipment and both groups have storage.

A big change for the choir ensemble now has a room to call their own. In addition, there are smaller breakout rooms for individual groups to practice their parts. These breakout rooms are very handy for the choir group, and they provide more storage space for sheet music and concert robes.

The band ensemble now has a place to clean and repair equipment. As well as lockers to store instruments and sheet music. The band ensemble also has more space to spread out. In the past, the band room didn’t have much space so this new room is important to them.

All music ensembles have state-of-the-art technology to help them perform. Also, each room in the music wing has acoustics, allowing them to have a blended sound, as well as blocking the sound from other ensembles that might be distracting. The ensembles also have a recording system installed in their rooms that allows them to record practice sessions and rehearsals in order to go back and listen to them.

Overall, there are many improvements of the new music wing over the old one. These amazing modifications allow for more space, storage, new dedicated rooms for different music ensembles, and state-of-the-art technology to help improve the quality of performances.